Before visiting Kenya for your safari tour, you have to be aware of some of the most attractive and adventurous things you are to find or meet in Kenya. The country is an East African country under the governance of President Uhuru Kenyatta. Kenya is made up of many things a tourist will be pleased by visiting and meeting them. Kenya is among the best countries in Africa where a tourist/traveler will enjoy his or her African safari and the following are the things you really need to know on your Kenya safari.

Before knowing what is found in Kenya, you should first search and consult a best tour agency which will plan for your Kenya safari tours such as the Eco Tours Kenya. After consulting the agency, you will then be told by the agency what is needed for your safari to be superb and not to get inconveniences in your trip to Kenya. The agency will do most of the important things for your safari such as; hotel reservation, airport transfers, hiring you a good 4×4 vehicle with pop-up roof such that you have an excellent game viewing from the vehicle while in any of your destination in Kenya plus many others.

After all those, you will then have to show something that you are serious with your safari and that the agency should plan for it thoroughly well through paying some deposit to the agency and then the balance can be cleared on your arrival on Jomo Kenyatta airport in Kenya.

However you must note that advance booking is very essential if at all you want your safari to be a best one and memorable and not to get disappointments in your safari thus you should at least book four months earlier before your safari. After confirming your Kenya safari with the agency, you will then wait for your dates for flying to Kenya and expect to meet many interesting things in Kenya such as;

The park is one of the most talked about parks in Africa due to its wildlife abundance which are mostly viewed in July, August, September and October during the great migration of Wildebeest together with other wildlife species such as Zebras and many more. What makes the park more attractive and being one of the best parks in Africa is this annual migration of Wildebeests, Thomson’s gazelles, Zebras, Topis and Elands which migrate to the park in a large quantity and the most major migrants during the annual migration in the park are the Wildebeests where over 1.5 million of them are seen during the migration and the other wildlife species are also seen in large populations when crossing the Mara River to access the Park.

The park is not only known for its annual migration but also it is worldly known for keeping animals in large numbers including Africa’s big five which are; African elephants, Cape buffaloes, Lions, Leopards and Rhinos. Over 500 bird species will also be met in the Park plus other wildlife species such as; Impalas, Coke’s hartebeests, Hyenas, Masai giraffes, Jackals, Crocodiles, Hippopotamuses, Large roan antelopes and many others. Your visit in the Park will also pave for you a way to meet the amazing culture of the Masai people during your cultural encounters and other interesting activities in the Park are; game viewing, bird watching, game drives, nature walks and balloon safari experience.

You will meet Amboseli National Park

Are you that traveler who likes viewing a large number of African elephants and all Africa’s big five such as Lions, elephants, Rhinos, Leopards and Buffaloes, you should then opt for this Park because it keeps the hugest number of elephants in Africa. The highest free-standing Mountain is resided on the borders of this Kenya’s Park and Tanzania though it is most resided in Tanzania but one of its foots being resided in Amboseli thus your visit to the Park will offer you with the brilliant views of this Africa’s highest mountain (Mountain Kilimanjaro).

The beauty of the park is not only in its wildlife and bird life but also the landscape of the Park is so attractive and it also supports and encourages the game driving activity to take place in the Park thus having an excellent game viewing. Your visit to the Park will also pave or you a way to meet the Masai people and enjoy their culture at large including their traditional beliefs and dressing styles all which will make your visit a memorable one.

You will meet Lake Victoria

Kenya is one of the three countries (Tanzania, Uganda and Kenya) where this Lake passes through and all the countries are found in East Africa. Lake Victoria is Africa’s largest freshwater lake and world’s second thus your visit to Kenya will let you view this lake and luckily you will also visit some of the Rivers in Kenya which feed this lake to make it Africa’s largest and world’s second. You will enjoy a lot of things at Lake Victoria including the boat cruises, view of the brilliant Islands at the Lake, taste of the fish species caught from the lake such as Tilapia and Nile Perch plus many others. 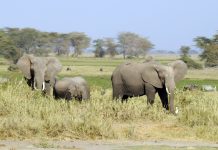