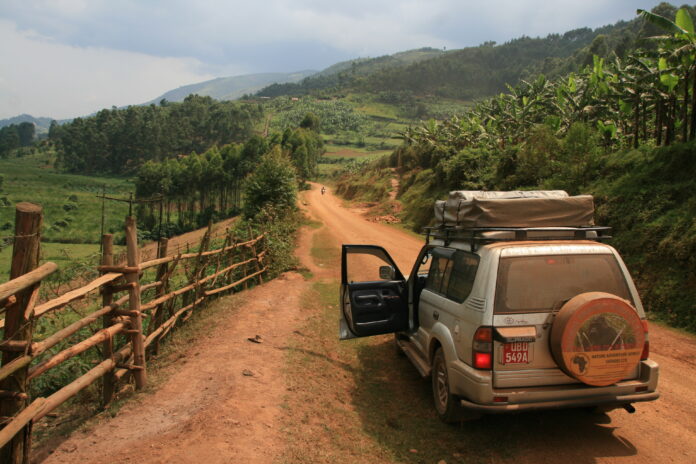 Experience Uganda’s most breathtaking National Parks on a very special road trip camping safari. It’s been said by better people than me (Sir Winston Churchill for one, who famously described Uganda as “The Pearl of Africa”), that Uganda is one of the most beautiful countries in Africa. In fact, as far as I am concerned, it’s one of the most beautiful countries in the world and I don’t just mean it’s physically beautiful. The people themselves, who seem permanently to smile, are as beautiful and welcoming as the landscape.

So, if you’re looking for a safari destination that offers pretty much a bit of everything but that still retains a sense of the unusual then Uganda is unlikely to disappoint. The road trip includes visiting Kidepo Valley, Murchison Falls, Sipi Falls, Kibale, and Queen Elizabeth National Parks.

These places are beautiful national parks with natural beauty, historical and wildlife richness are found in Savannah and tropical rain forests.  You will be spending your nights under the African sky in your rooftop tent with your private 4×4 Land Cruiser.

We arrived at Entebbe Airport the day before we started our trip and had an overnight at Cycads Guest House in Entebbe. The following day, the company driver brought the roof top tent car to our guest house and handed it over to us plus some documents that we had to sign on and make the payment. Off we transfer to the eastern Uganda in Kapchorwa to see the beautiful Sipi falls. Sipi falls is an adventurous attraction that one should not miss out on a trip in Uganda.

Upon arrival, our guide William took us around and he took us through a lot of amazing stories about the culture of the Sebei people which is so interesting. How and why the Sabin used to circumcise girls which was later outlawed and the history of the kingdom. Kapchorwa is a Home of Friends. Sipi falls it’s a series of three water fall surrounded by village walking trails and lush green coffee-producing hills, we enjoyed magic photos and hiking.

The views there are breathtaking, for a person who is interested in nature and beautiful views, this is the place I would recommend, the tranquility of the place, the natural air and the speaking nature, you literally feel yourself talking to the water and the trees and surrounding. It’s a perfect place for wellness travel and a great place to make a new life plan.  We camped with our roof top tent in Soroti.

Nestled up against the remote South Sudanese border in the far northeast of Uganda, Kidepo Valley National Park has long been a by word for inaccessibility and remoteness. This is partly due to geographical distance from Kampala and the southwest safari circuit.

Most people fly here, but we drove the long bumpy road north, which made us appreciate its remoteness even more. The open grassland surrounded by mountains makes a stunning setting for a wide variety of animals including cheetah, which doesn’t occur in other Ugandan parks. We were welcomed by a large herd of slightly nervous elephants when we entered the park and we saw lions on several occasions.

Other highlights included a 1,000-strong herd of buffaloes and lions lounging up on one of the immense granite boulders that characterize the Narus River Valley, which is the main wildlife viewing circuit. Other wildlife associated with the Narus Valley includes Rothschild’s giraffe, Burchell’s zebra, Bohor reed buck and Oribi, while characteristic birds with a very limited distribution elsewhere in East Africa are Clapperton’s francolin and rose-ringed parakeet.

Game viewing is less reliable in the more northerly Kidepo River valley, but this is a good place to look for Uganda’s last wild ostriches and the much-localized Jackson’s horn bill and Karamoja apalis.

With our 4×4 rooftop tent car we camped at Kakine camp site, the most popular camp site in this park. It overlooks the Narus valley and offers amazing views of the Savannah grasslands. The site has a toilet block with running water. More to that, there is a telescope that gives you the opportunity to view wildlife in the distance.

Uganda’s largest National Park features on most safari itineraries because of its mix of beauty and wildlife. The park is both Uganda’s largest and oldest conservation area, occupying just under 4,000 square kilometers in the far west of the country.

It is named for the impressive cataract formed where the waters of the Victoria Nile squeeze through an eight-meter-wide gorge on their way downstream to Lake Albert, the shores of which also lie within the park.

Four of the Big Five are here (only rhinos are absent, but they can be seen at the Ziwa Rhino Sanctuary on the drive from Kampala) and lions and leopards’ sightings are pretty common. Murchison Falls National Park is a nice destination for a road trip from Kampala.

The park is bisected from east to west by this river, and it is from the southern side that a loop road offers access to the top of the falls. The northern sector, by contrast, consists of more open Savannah and the game-viewing is excellent.

During our visit, elephant, buffalo and the endemic Rothschild’s giraffe were all abundant, while antelope in impressive numbers included hartebeest, water buck, Kob and the largest population of Oribi I’ve encountered anywhere in Africa.

The park has a good reputation for predators, with both lion and leopard being seen daily during my visit, and spotted hyena calling at night. We camped at Red Chill Rest Camp that is suitably well located in the park and home to most of self-drive travelers in Uganda with our 4×4 Rooftop tent vehicle.

The world’s best chimpanzee encounter. Kibale is the epicenter of primate trekking in Uganda. The park is home to 13 different primate species with habituated chimpanzees, rare L’Hoest’s monkeys and the threatened red Colobus being the big three. However, most tourists come here because a visit to Kibale almost guarantees them a chance to see very relaxed chimps going about their daily business.

And because this is the most popular spots for chimp trek in East Africa, the result is they have become extremely habituated over time and I like this from quality of sightings and purely photographic point of view.

There is the usual option to spend an hour with the chimps, but Kibale offers a day long experience too. You might also see elephants, buffaloes or leopards, but don’t count on it, the dense forest makes finding them difficult.

On the other hand, night walks are excellent here with bush baby and civet sightings fairly common. And last on our road trip in Kibale, bird watching is also very good though most birders focus their efforts outside the park in small preserves like Bigodi Wetland Sanctuary which offer grassland and wetland birds alongside Kibale’s Forest Species.

Despite this being Uganda’s most well-known and regularly visited wildlife area, it is far from overcrowded. What I like most about Queen Elizabeth is that it boasts a spectacular array of habitats and landscapes for tourists to appreciate. Boat cruises along the game-rich Kazinga Channel are a perennial favorite with wildlife enthusiasts and birders alike.

On a clear day you can see all the way to the Rwenzori Mountains, but there’s no need to travel that far because volcanic features dominate sections within the park. The result is a stunning landscape peppered with crater lakes best appreciated from the air.

The Kyambura Gorge on the edge of the national park is also a good place for tracking chimpanzees. But, without doubt, my favorite part of the park is the wild Ishasha sector: famed for its tree-climbing lions, which can regularly be found hanging out in the shady figs along the main road. This is a park with plenty of wildlife and lots to offer the discerning safari aficionado. 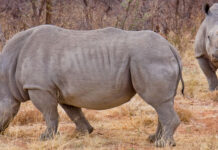 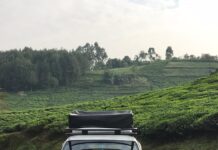 Best Time to Go on a Self-Drive Safari in Uganda